Students from the University of Central Lancashire have just returned from a remote arctic expedition to one of the best places on the planet to view the Northern Lights, inspired by a book and film that will be published by UCLan Publishing later this year.

The expedition teamed up with Off the Map Travel, a specialist soft adventure travel company, to take 8 students specialising in a range of subjects including photography, creative writing, publishing, film production and astrophysics.

The group started working together in September 2012 and finally flew out to Bjorkliden in the Arctic Circle in March 2013 to gather footage and material for a documentary film and book about the search for the Northern Lights.

Working with a range of experts in the region to get a true insight into the aurora, some got even closer to the spectacle in a small plane accompanied by a select group of well-known scientists and astronauts. Lorna Hargreaves, one of the lucky students, said: “I couldn’t believe it when they offered us a chance to actually fly to see the aurora. It was an amazing experience which I will never forget. There were only about ten people on the flight so we were so lucky. The aurora is so beautiful and ethereal and extremely difficult to capture on film but I think we did ok. I can’t wait to see the book and film when it’s finished.” 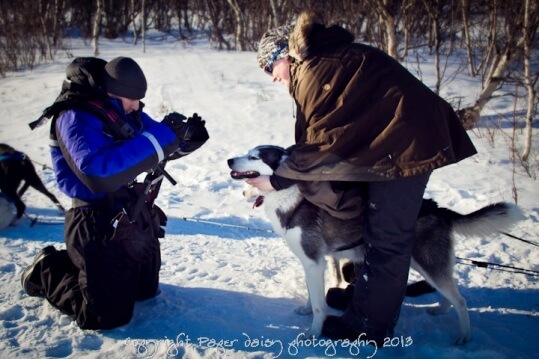 The dedicated team from UCLAN are now working hard to bring their footage and findings together and will publish a book and documentary film, both of which will be completed in August of this year, and will be available through major retailers including Amazon.com.

The project is a being produced by UCLan Publishing, a commercial not-for-profit trust set up and run by students to raise money for good causes. Previous books have raised enough funds to give eight Maasai orphaned children in Kenya the chance of a secondary school education.

Debbie Williams, Lecturer and Head of UCLan Publishing, said: “The students on this project have been absolutely brilliant and worked so hard. It was great that they had such a unique and amazing opportunity. We were working in extremely challenging conditions – sometimes the temperature really plummeted and we had to wear expedition wear even just to step outside – but they all rose to the occasion.”

Jonny Cooper, expedition guide and director of Off the Map Travel explains: “Stronger solar activity, like that in a solar maximum, leads to a greater frequency and intensity of the northern lights. Impressive auroral displays are therefore significantly more likely near a maximum in the solar activity cycle than near a solar minimum. With the sun entering a solar maximum in 2013 there is no better time see, photograph or study the Northern Lights.”
“Swedish Lapland really is one of the most remarkable areas offering some of the best possible opportunities to see the northern lights.”

The project took over a year to plan and included several pre-trip training sessions on survival in extreme temperatures and the effect that this could have on film and camera equipment.

The expedition also allowed the team to work closely with the local people including the Sami People, the only indigenous population in Europe, to learn how they survive and retain some of their traditions; spend many nights in small, traditional Sami mountain huts; brave an hour’s jaw-dropping ski lift ride to reach the aurora sky station; learn to harness husky dogs and drive a sled and snow shoeing up mountains – all to gather footage and information for what is set to be a spectacular film and book about the aurora.

The group was lucky enough to see the aurora every night and the result is breath-taking photographs and film footage.