Northern Lights trips feature at the very top of most people’s ‘Bucket List’ and, as experts in the Aurora, we can totally understand why! Standing beneath this awesome natural wonder is breathtaking, to say the least. Whether you want to experience them in complete silence at the top of a mountain or enjoy them with the roar of a snowmobile engine as your theme tune as you fly through the snowy forests we can help!

We are proud to say that all of our experienced Adventure Artists have been lucky enough to witness this natural phenomenon in many different ways and in many different countries. This allows us to share our personal experiences and recommendations from our own Northern Lights trips to guide you and help to make your Northern Lights holidays a reality by designing your perfect trip.

Iceland offers something a little different than its fellow Nordic counterparts. Despite its name Iceland isn’t always guaranteed to have snow; being an island, the weather is fairly changeable and  you might well have rain, wind, clear skies, or everything all in one day but we think this just adds to the drama! The best time to travel there searching for the Aurora is from September onwards where you can do a range of self-drives, private tours, or city breaks with excursions out of the city. Iceland has incredible scenery to explore from waterfalls, black sand beaches, and glaciers.

Take a look at Northern Lights Holidays in Iceland.

Norway is a fantastic destination to visit for the Aurora. Much like its neighbours Finland and Sweden you need to head north to get yourself in some of the best locations to go out looking for the Northern Lights.

Tromso is a great spot to be based if you want to look at the option of a city break with excursions to take you out of the city and beyond Tromso there are some incredible locations including Senja, Lyngen Alps, and the Lofoten Islands. Heading even more north you can visit places such as Alta and Kirkenes.

Take a look at Northern Lights Holidays to Norway.

Svalbard is roughly 1500km from the North Pole and so there isn’t much further North than this. With a flight from Oslo or Tromso you will find your self on this fascinating island that in the height of winter offers the possibility of seeing the Northern Lights in the morning, afternoon and night! An opportunity that isn’t possible anywhere else.

During the winter there is snowmobiling, dog sledding, and even a snowcat to go aurora hunting or discover ice caves. Svalbard is without doubt the most adventurous destination where one can truly feel like a real explorer.
Take a look at Northern Lights Holidays to Svalbard.

In Sweden, Swedish Lapland is the best location for a chance of spotting the northern lights. Whilst the winter months are the most popular time to travel; it is worth remembering that autumn is also beautiful time to travel to Sweden and despite the lack of snow there are plenty of amazing activities and the same great chance of spotting the Aurora.

From Abisko to the famous ICEHOTEL, Lulea where the unique Treehotel is based, the Arctic Bath or Arctic Retreat there are some amazing destinations on offer with perfect locations to to enjoy the variety of activities and increasing your chances of spotting the aurora.

Take a look at Northern Lights Holidays to Sweden.

If one wants to try and witness the Northern Lights from a glass cabin or igloo then Finnish Lapland certainly has plenty of options to make this happen. With most of its locations nestled in the fjells you’ll also find a lot of the accommodation in Finland has options for log cabins equipped with saunas and fireplaces.

At Christmas, you can add in private visits to see Santa Claus from the Christmas capital Rovaniemi too which makes Finland quite the winter wonderland over the festive season.

Take a look at Northern Lights Holidays to Finland.

What are the Northern Lights?

The Northern Lights, Aurora Borealis (Northern Hemisphere) or Aurora Australis (Southern Hemisphere) are the result of a collision of high energy particles from the sun and atoms high in the atmosphere causing them to become what is known as excited or ionised.

When these elements in the atmosphere return back to a normal state, a proton is released in the form of light, the Aurora, and this is the awe inspiring imagery that makes Northern Lights holidays such a popular bucket list experience.

Origin of the Aurora

The energy that drives the Aurora is generated by the sun and the constant release of high energy particles causing what is called the solar wind. Just like a normal wind the strength and speed of the solar wind can change, depending on what is occurring on the surface of the sun.

Events such as Solar flares can cause a high density of these particles to be directed towards Earth so creating a solar storm with high solar wind speeds. In turn this then increases the energy in the upper atmosphere so causing large Auroral displays.

Colours of the Aurora

Aurora can come in many different colours depending on which chemical elements in the atmosphere are excited when hit buy the solar wind.

The different colours seen depend on which element is interacted with, what height they are and what state they are in. If oxygen is involved then the Aurora can be green or red, nitrogen blue or red.

When is the best time to book Northern Lights Trips?

The best time of year for northern lights trips is between September and March. The Aurora Borealis is visible from nightfall to sunrise, although the best hours are typically between 9pm and midnight. While you will need to be under open, dark skies for a clear view of the lights, the Aurora is so powerful that it can still be seen under clouds.

When booking Northern Lights trips it is also good to consider which other activities you would like to do – there is a lot to choose from and this will affect where and when you travel.

The northern lights have, and in some ways always will be, surrounded by myth and legend. Even the modern day solar scientists openly admit that there is so much that is still not understood – continuing to fuel appetite for stories passed from generation to generation. Although the first written account of the aurora is thought to date back to 2,600BC in China, it is a cave painting from southern France from 30,000BC which is believed to be the earliest surviving record of the phenomenon. The Bible is also believed to describe the aurora in the Old Testament *1 as well as references in ancient Greek and Roman literature*2. It’s no wonder that Northern Lights trips are so popular as it looks as though we have been fascinated with the northern lights for as long as records exist.

According to one popular Finnish myth, magical arctic foxes sweeping their tails across the snow and spraying it into the sky is the real reason for the spectacular light show. In fact, the Finnish name for the northern lights even translates as ‘fox fires’.

Old Icelandic folklore believed that the northern lights would ease the pain of childbirth. It was not all good news for mothers though – it was also thought that pregnant women looking at the lights would give birth to cross-eyed children.

Norse mythology connected the aurora borealis with war. It was believed that the lights appeared when sunlight reflected on the shiny shields of the Valkyries who were racing across the sky on the way to their resting place, Valhalla.

The Sámi people traditionally lived in a vast Arctic area of northern Sweden, Finland, Norway and Russia. With an unparalleled proximity to the northern lights a number of legends to explain the phenomenon were passed through generations. 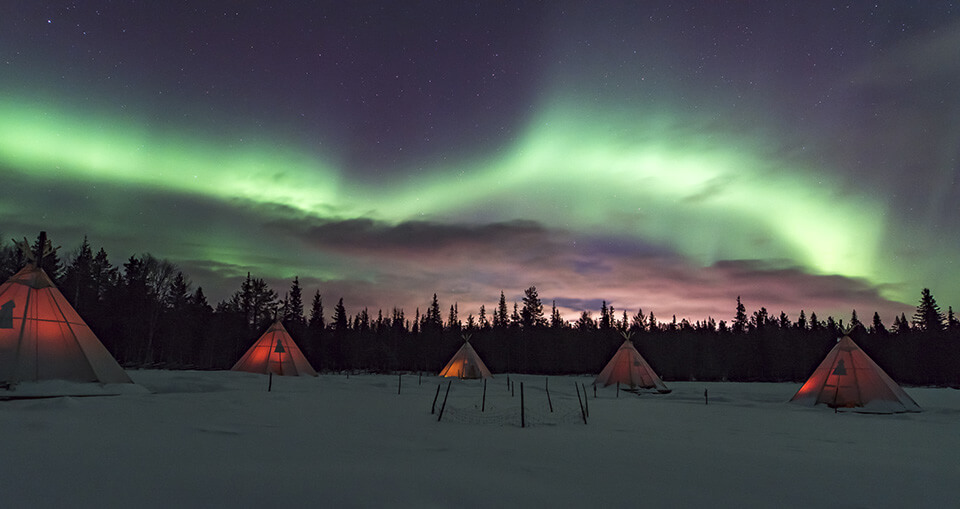 Believing that the lights were souls of the departed, Sámi believed in behaving solemnly and respectfully whenever the lights were in the sky. Bad fortune awaited anyone who showed them disrespect so many people chose to keep their families indoors when the lights were on display.

It was also believed that if you whistle a tune under the lights, it would summon the spirits closer and closer, until you were whisked away.

On a positive note, they also believed that the lights were also considered to have the power to aid conflict resolution.

The Scandinavian name for the aurora translates as ‘herring flash’ as it was believed that the dancing whirls of green light were a reflection of huge schools of herring in the sea. Whenever the lights were visible, fishermen were expected to be blessed with good catches of fish.

According to Swedish legend, a winter with frequent displays of the northern lights served to predict a good yield of crops the following year.

In Norwegian folklore, the northern lights were thought to be the spirits of old maids dancing in the sky and waving at those below them.

According to one popular Finnish myth, magical arctic foxes sweeping their tails across the snow and spraying it into the sky is the real reason for the spectacular light show. In fact, the Finnish name for the northern lights even translates as ‘fox fires’.

Norse mythology connected the aurora borealis with war. It was believed that the lights appeared when sunlight reflected on the shiny shields of the Valkyries who were racing across the sky on the way to their resting place, Valhalla.

Old Icelandic folklore believed that the northern lights would ease the pain of childbirth. It was not all good news for mothers though – it was also thought that pregnant women looking at the lights would give birth to cross-eyed children.

Make your dream holiday a reality

Simply get in touch by using one of the telephone numbers listed below, emailing us directly at [email protected], or using our contact form.

Because for us, it's about you

Our itineraries are tailor-made for every customer – based on what you tell us your interests and travel aspirations are. We hear your desires and do our best to avoid your frustrations.
02

We choose experiences which are authentic to your destination – to help you connect with the culture. We keep it real, immersing you in the lives of the locals so you can experience their way of life.
03

You deserve the best

Our Adventure Artists are highly experienced in the destinations we offer and have strong relationships with the suppliers, ensuring that you always get the best first-hand knowledge available. We go that extra mile for you.
04

You can't put a price on experience

Our aim is to supply you with the best – of everything. From the personalised service, to the after-sales support, to being on call while you are travelling and ensuring our suppliers deliver on our promises. We give it our all at every step of the way.
05

We aim to promote sustainable travel

We choose the most sustainable options for transfers, accommodation, and activities, wherever possible. We explore multiple options in search of eco-friendly alternatives for you to choose from because we are passionate about our planet and understand the impact travel may have.