The University of Central Lancashire (UCLan) and Off the Map Travel this weekend brought the magic of the Northern Lights to Preston to celebrate the launch of a new book exploring the famous Aurora Borealis.

Visitors to the launch of the new book named Life Beneath the Northern Lights, were given the opportunity to experience a 360 degree projection of the Aurora Borealis inside a purpose built planetarium – which is thought to be the first time this has ever been attempted in the UK.

The new book, as well as a documentary charting the writers experience in the Arctic, launched this weekend is the work of eight UCLan students who journeyed to Bjorkliden and Abisko in the Arctic Circle with specialist soft adventure travel company and northern lights experts, Off the Map Travel, to gather breathtaking material exploring every aspect of the mystical lights as well as charting their own experience in the arctic. 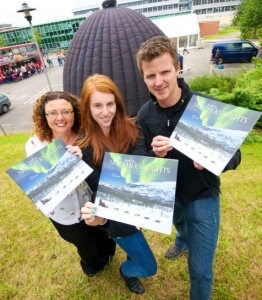 Jonny Cooper, director of Off the Map Travel and northern lights expert, said: “Bjorkliden and Abisko in northern Sweden are some of the best places in the world to see the northern lights due to the high percentage of clear skies caused by the surrounding arctic mountain range and their proximity to the auroral oval – the latitude at which aurora are commonly seen.

“The team on the expedition were treated to spectacular displays of the northern lights due to a period of intense solar activity and were able to experience what many only dream about.”

Working with experts in the region to get a true insight into the aurora, some got even closer to the spectacle by taking a flight in a small plane accompanied by a select group of well-known scientists and astronauts.

Lizzy Pattison, the project leader and editor of the Life Beneath the Northern Lights book, said: “I couldn’t believe it when they offered us a chance to actually fly to see the aurora. It was an amazing experience which the team will never forget. There were only about ten people on the flight so we were so lucky. The aurora is so beautiful and ethereal and extremely difficult to capture on film but we loved, and rose to, the challenge.”

The project was produced by UCLan Publishing; a commercial not-for-profit trust set up and run by students to raise money for good causes.

Debbie Williams, Lecturer and Head of UCLan Publishing, said: “It was great that the students producing the book had such a unique and amazing opportunity. We were working in extremely challenging conditions. Sometimes the temperature really plummeted and we had to wear expedition clothing even just to step outside.”

The project took over a year to plan and included several pre-trip training sessions on survival in extreme temperatures and the effect that this could have on film and camera equipment.

The expedition also allowed the team to work closely with the local people including the Sami People, the only indigenous population in Europe, to learn how they survive and retain some of their traditions. The team spent many nights in small, traditional Sami mountain huts; braved an hour’s jaw-dropping ski lift ride to reach the aurora sky station; learned to harness husky dogs and drove a sled and snow shoeing up mountains – all to gather footage and information for the spectacular film and book about the aurora.